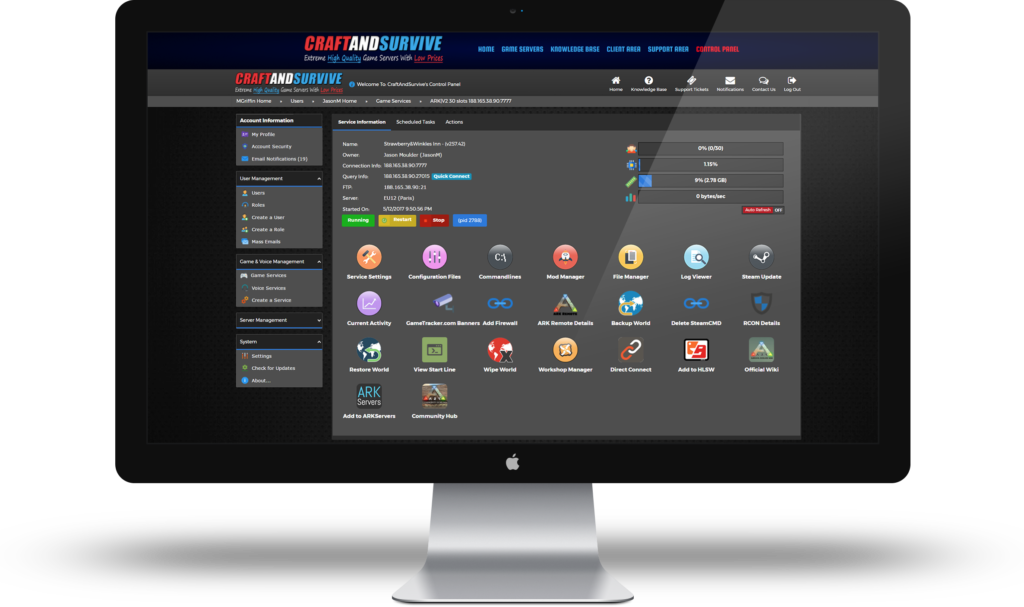 We back your server up every 15 minutes. Your backed up files are sent to our offsite backup system and should you ever want to restore them we have a simple tool. Choose the backup and click restore button, choose just the world or all files.

We have your standard text editor, but for novice users, we have a carefully designed "easy configurator" which makes changing your server settings as easy as possible. Drop down menus and text input areas, click save and you are done.

With our mod workshop tool you can easily download thousands of Day of Dragons mods straight to your server, gone are the days where you must upload large files via FTP. Simply put the mod id in and click download.

We have fully trained staff working around the clock so should you need us for anything we are always waiting for you. Tickets are answered on average in 20 minutes and resolved fast.

Install Beyond Api via 1 click Install button inside our Mod Manager. Request in support ticket from our client area for DLL access to upload your plugins via the File Manager.

We support all maps, even custom built maps. You simply use the drop-down menu to select which map you would like and click save. Our system does the rest.

We have the latest 2018 DDOS protection in place to make sure that no disgruntled players can aim an attack at your server and cause damage to your player base.

No expense has been spared on the development of our control panel which is an industry leader. With full FTP, built in file manager, built in MySQL manager, easy to use configurators, PID, stop, start, scheduled tasks, a glossy modern look and much more.

We have 15 data centers throughout the world. Including Dallas, New York, Oregon, Los Angeles, Charlotte, Montreal, Sydney, Paris, London, Frankfurt and many more. We have got the globe covered.

Our control panel makes it amazingly easy to change your Day of Dragons server settings.

Absolutely outstanding service for any survival servers you need, their customer service is fast and effective. Prices are extremely competitive.

I have used them for the best part of a year, across a total of three games and they have always done their absolute best to fix any issues that have occurred in a very short period of time.

I've had my Ark server for 3 months and I love it, I'm setting up a crossark this Friday, so I am super excited. I wouldn't dream of hosting with anyone else. I've had NO issues with lag at all, and we have a MASSIVE 20x20x20 underwater tek base. They offer great gameplay for the price. It IS the cheapest when you compare to $/slot. Their customer service is always kind and friendly. Tickets are answered within a few hours and they are willing to help and explain things for you. With the shut down of all my official servers, I can absolutely say that I am so glad my tribe moved to a CAS server. We will now have a cross ark to meet all our needs!

Go to our Trustpilot page

How quickly will my server be setup?

We set up servers instantly, as soon as you order you can log in via our 'My Services' tab in the client area. As soon as you place an order, our automated system will create your server, and we will send you an email with the login details, so you have a record.

What if i want to cancel my Day of Dragons server?

If you want to cancel its a very simple process. You can cancel anytime and from the moment you tell us you do not want the server anymore you will not be charged another penny. We have a no quibble cancellation policy.

We stand by the quality of our Day of Dragons hosting and the only reason you would want to cancel is that you were no longer playing Day of Dragons.

Will the server be online 24 hours a day?

Yes. Your server will be online 24 hours a day, 365 days a year. Always online. This is the main reason that clans and communities want to host Day of Dragons server with a hosting provider. It means they can go about their daily lives and the server continues to run. Power and network are all provided inclusive in the monthly fee, there are no hidden extras.

How easily can I get assistance with my Day of Dragons server?

Our support team is available to you 24 hours a day seven days a week, even on public holidays.  All you need to do is log into the client area and click support tickets. You can also email us; all of the information is on our contact us page.

Order now, we will refund if you are not 100% satisfied.

Day of Dragons is an online creature survival sandbox game set in a large, beautiful, open world with multiple biomes. Rule the world as one of several dragon species, or unlock the secrets to playing as a giant Elemental.

Play as Dragons and unlock other playable mythical creatures such as giant Elementals.

Survive! You come into the world as a hatchling and must eat, drink, survive, and grow to become an adult.

Online Steam Multiplayer. Play with other people. Some creatures are players, some are AI. It all takes place on a Dedicated server that you or someone else is hosting.

Huge Mega Map. The world is huge and beautiful with multiple biomes including forests, deserts, lava, swamps, grasslands, and caves.

Once you purchase a server with us, your game server will begin setting up instantly after
payment confirmation. Hassle free server setup.

If you have ordered the wrong server or addons
and would like a refund, no problem simply
request this via support ticket within 24 hours.

The main feature we are known for is not only our lowest prices but also our amazing support team. Support replies come in as soon as 5 minutes or less.

No matter were you or your online gamer friends live you will find a location that fits your needs.
Our everage pings are just 15ms across the board.

Our server backups are stored on a dedicated NAS
located at the top of the server rack in the D.C.
They are connected via 10GBps cable for high speed.

Over 1000 Hours has gone into development of our control panel. We offer our customers with the most easy to use drop down / click & select CP menus.

When we say the cheapest, we mean it. Our prices
will never be beaten. No other provider can offer
the same High Quality, Low Prices as we do.

We don't just "Minimize" like all other providers, we stop attacks in their tracks at the datacenter level. Your server will remain online 24/7 365 guaranteed.